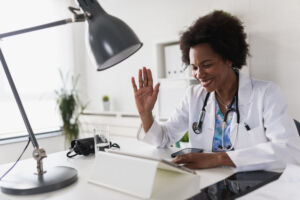 The representative for the physical medicine and rehabilitation job emails a draft contract to you as a Word document. You should save the document to your local drive and turn on Word’s “track changes” feature. The employer’s suggested revisions then appear in red on the screen, and comments show up in boxes on the side.

Once you’ve flagged your concerns and suggestions, you then email the “redlined” document back to the employer for the PM&R job. Now there are two versions of the same contract – one saved in the employer’s drive and a redlined contract stored in your drive.

The employer then responds to your comments and revision requests and makes suggested revisions in a third version of the contract. This copy is then sent to you once again, and you now create the fourth version in response.

Unsurprisingly, it becomes almost impossible to track the various versions and determine who made what revisions and why.

Let’s move onto the contract negotiation discussion process when you’re talking with your potential employer about a contract for a physiatry job.  You’re at the point where you and the employer don’t agree.  What should you do?  Is now the time to concede or stand your ground?  It all depends.  The experts says that if it’s the first point of negotiation that you should not make the concession.  If you concede early on, you’re setting the stage for weakness in subsequent negotiations.

In a formal experiment with 120 professional negotiators, both parties controlled their concession behavior for most of the hour-long session. Towards the end of the hour is when most of the concessions were made and deals were reached. The next time you are in a negotiation, recognize that your tendency will be to give away too much as a deadline comes close. Discipline yourself to make smaller concessions and spread them out a bit longer. Also remember that most deadlines are themselves subject to negotiation. There is usually time enough to make another concession if you must.